The Art of the Drop Shot

"The drop shot is really effective tactically, because most players move really well laterally but many struggle moving forward."

To be a truly great tennis player requires variety and a complete game. A powerful serve. Penetrating groundstrokes. Accurate volleys. Punishing overheads. Once your game is strong in these areas it can be fun experimenting a bit with new shots to add to your arsenal.

The drop shot is a deadly weapon on the tennis court. A well-carved dropper can force an opponent to take 10 or more strides to reach it. Even if your opponent does reach the ball, there are usually limited shot possibilities available to them. 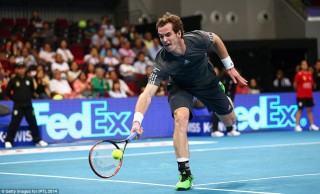 Advantages of the Drop Shot

The drop shot was used to great effect by Anastasija Sevastova in her victory over Maria Sharapova at this year's U.S. Open. Sevastova could not match the power of Sharapova and had only eight winners on groundstrokes compared with Sharapova's 26. But Sevastova had seven winners on drop shots — a third of all her winners. "I couldn't hit her off the court, that's for sure, so I had to have a game plan," Sevastova said.

"Even if it is not immediately successful there can be big value down the road in other points just because you are keeping your opponent off balance."

How to Practice a Drop Shot

To practice, stand inside the baseline then just drop some balls to yourself. Try to hit each one over the net with as much backspin as possible, and see how many bounces it takes the ball to leave the service box on the other side. This will be a good way to gauge your spin and control of the shot. If it bounces once then leaves the box, it has too much pace on it. If it bounces multiple times and stops dead that is fantastic. You are ready to try a drop shot during match play.

How to Hit a Drop Shot

To hit a drop shot, turn your feet sideways and take your racquet back with an open face. Your backswing must be shorter than normal, as you're merely going to drop the ball over the net. Keep your non-dominant hand out in front you to track the ball. Don't hit this shot unless you're inside the baseline and your opponent is in a defensive position.

Beginners often believe they should back away from a drop shot. But your weight must go forward, as it does on your other strokes. With an open racquet face, carve down and slice through the ball, keeping your back straight and bending at the knees rather than the waist. An open face will allow you to hit the ball on an angle. Keep your hitting hand and arm relaxed.

Sink your body weight down into your legs as you lower your body along with your racquet. The ball will go up because you've carved under it. This generates backspin and gives the ball height to float over the net. Continue to extend your non-dominant hand to help you maintain your balance.

On your follow-through, keep your shoulders level and maintain good posture. The face should remain open. Once you have the basic drop shot down, you can work on disguising it and using it to open up the court. 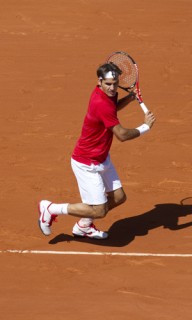 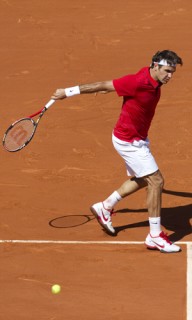 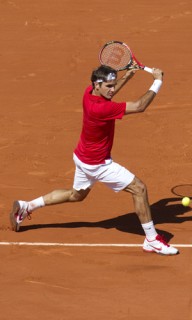 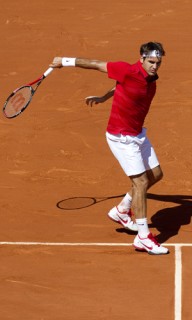 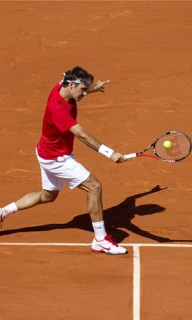 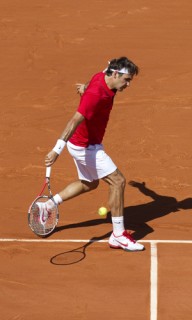 "Playing a drop shot is a bit like catching an egg, so you've got to have very soft hands."

Nine times out of 10, the best way to return a drop shot is with another drop shot. It's almost like saying, "No, no, I don't want it. You have it." Again, use the element of surprise to your advantage. If your opponent follows their drop shot in and attacks the net you might consider a high lob over their head if possible.

Remember, the more backspin the better. Use a continental grip and be sure to pick the right time to hit a dropper. Sometimes a is used as a bailout shot when a player is tired or off his or her game. If you don't hit it just right, you can be punished.

Wise shot selection, court location, and a good disguise are key elements to using a drop shot successfully. Get out there and try it. If it doesn't work the first time don't give up. Try, try again.

How Natural Gut Tennis String is Made
Have Your Tennis Balls Lost Their Bounce?

Love that last shot by Adrian Mannarino in the above video! I practice a backhand backspin volley drop shot at the net using a ball machine and achieve the same result; ball bouncing backward over to my side.

0 Cancel Reply
Love that last shot by Adrian Mannarino in the above video! I practice a backhand backspin volley drop shot at the net using a ball machine and achieve the same result; ball bouncing backward over to my side.
Cancel Update Comment

Good for you Scott. It is a lethal weapon to employ on court. Keep up the practice

0 Cancel Reply
Good for you Scott. It is a lethal weapon to employ on court. Keep up the practice
Cancel Update Comment

Tennis Elbow and Strings
Tennis Gear
Just so we're clear, if you have tennis elbow, changing your strings won't get rid of it. It will help to reduce the vibration that you experience which can in turn reduce the pain. At this point if y...
16541 Hits
3 comments
Read More

Have Your Tennis Balls Lost Their Bounce?
Tennis Gear
Have you ever gotten to the court, only to find the perfectly good looking tennis balls you were going to use, have completely lost their bounce? Many players use a new can of balls each time the...
12790 Hits
4 comments
Read More

3 Winning Hybrid Tennis Racket String Combinations
Tennis Tips & Drills
This is an entry from my regular blog about racket stringing and I posted it here:  After reading this article you will have 3 winning hybrid combinations to improve your game. Some time back I publis...
8613 Hits
0 comments
Read More

The Unwritten Rules of Tennis
Tennis
Tennis Instructions
Don't let bad calls or scoring disputes ruin your fun on the tennis court. This article presents USTA guidelines and the unwritten rules of tennis that are designed to help you enjoy th...
8251 Hits
1 comment
Read More